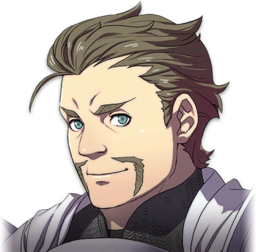 Okay, that's not fully truthful. Caspar's personal ability is, for pretty obvious reasons, much better than Alois's—causing Avo -10 to enemies within melee range is much better than Rally Luck. Caspar also gets Bombard instead of One-Two Punch—the two combat arts differ in that Bombard triggers a brave effect, while One-Two Punch effectively triggers Quick Riposte for one round of combat, i.e. the user is guaranteed a follow-up attack (while disabling the brave effect), while the enemy is denied a follow-up attack. Alois also has the benefit of being auto-leveled using Warrior until you recruit him, meaning he'll probably turn out quite a bit better than if you'd trained him naturally.

If you wnat my opinions on Alois's combat capability...well, just refer to the above. Anything I've said about Caspar or maybe Balthus is applicable to him, he's incredibly similar to them statistically. I guess the main practical differences are that Alois has fewer supports than Caspar (though he does have a Mt-boosting support with Leonie), and that as a non-student unit, Alois is susceptible to getting one-stat levels. Not that big a deal, given his growths, but they are something to be aware of.