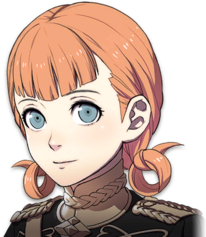 Perseverance: Use Rally to grant Str +4 to an ally.
Black/Dark Magic Learn List:
White Magic Learn List:
Unique Learned Abilities/Arts:
Annette's overall growths are pretty bad. I'll just rip the band-aid off on that one. She's a bit less frail than Lysithea, though not by much, she's considerably slower (35% for Annette vs. 50% for Lysithea), and her white magic learn list lacks Physic. All of that is fine, because she does two things: hit things really hard once, with a decent crit chance, and be the best Rally user in the game.

Annette, meanwhile, has Rally Strength/Speed/Resistance up by Authority C+, which can be obtained really early, and tops it off with the absolutely amazing Rally Movement at Authority S. Once she gets to Authority S, Annette can give any given unit Str/Spd/Res +4 and Mv +1 for a turn, providing a nice boost in killing power to weapon users, and letting them reach more distant targets—or, for Canto users performing hit-and-runs, letting them get an extra bit of distance between them and other enemies. Oh, and on top of Rally Speed, Rally Strength gives a unit +1 AS if their Str isn't a multiple of 5, and they're weighed down by their equipment. For example, if a unit has 16 Str, and they get Rally Strength, they're bumped up to 20 Str, increasing their weight reduction from 4 to 5.

As for her personal offensive capabilities, like I said, she's slow. Slow enough that her doubling anything is rare. To compensate for this, she's got decent black magic on her list in the form of Cutting Gale, Sagittae, and Excalibur—the latter of which deals effective damage against fliers, fun fact. This might also sound like a gimmick, but her access to Lightning Axe is actually really nice, since even low-rank axes have comparable might to black magic. A base Killer Axe has the same amount of Mt as Excalibur, before Lightning Axe's Mt bonus! If you don't mind Annette being in melee range, which you shouldn't if she's gonna kill some poor sap in one hit anyway, Lightning Axe (and magic axes in general) are worth considering if you want her to have greater personal offense.

Overall, while Annette isn't a perfect fit for every situation, I like her a lot. Good buff utility, and passable offense.