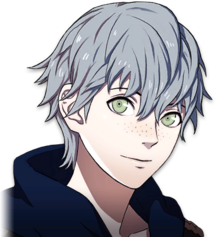 Lockpick: Allows unit to open doors and chests without keys.
Black/Dark Magic Learn List:
White Magic Learn List:
Unique Learned Abilities/Arts:
Ashe, in terms of raw growths, is a unit in the vein of Bernadetta, Ingrid, and Ignatz—mediocre Str, but decent Dex and Spd. His main difference from those three is that magic isn't really an option for him—even Bernadetta, who has an even lower Mag growth, has surprisingly good Reason and Faith learn lists. In contrast, the only notable thing about Ashe's learn lists is that he gets Physic, which isn't worth much just on its own.

I'll be blunt, Ashe is not a standout character by any stretch of the imagination. He's got few strengths, an irrelevant weakness, and a meh aptitude. The main defining features for him are his personal ability and access to Deadeye. His personal ability is a bigger boon than you'd think—keeping track of which units have which keys and adjusting their movement accordingly can be a pain. Ashe does not have those issues and can just open whatever doors and chests he feels like. The downside to this is pretty obvious, though: none of that relates to combat at all. On maps without doors or chests (and there are quite a few!), Ashe's personal ability might as well not exist.

Can't overlook Deadeye, of course. While it's of dubious use in the earlygame, as the game goes on and Ashe gains both more Dex and access to better battalions, with better Hit bonus, it's pretty useful. Situational, but still useful.

So, yeah, Ashe isn't spectacular and probably a low-mid tier unit at best. Why do I like him so much, then? Pretty much comes down to a combination of his personality (I find his honesty very charming), his supports (he's got a lot of good ones), and also him just defying the odds and being useful on some of my earliest runs of the game. If you're wondering why in the hell I keep calling him "my boy," that's why.