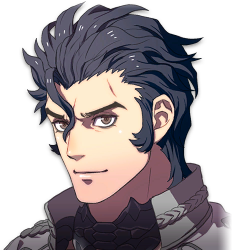 King of Grappling: Grants Str/Def +6 when HP is ≤ 50%.
Black/Dark Magic Learn List:
White Magic Learn List:
Unique Learned Abilities/Arts:
Balthus is a durable axe/gauntlet user. He's a weird mix of Caspar and Raphael, statistically, though his Res growth is way better than either of them. Ostensibly, he sets himself apart from them by being the War Monk Guy—a Faith strength and a Reason aptitude. The trouble is...he's not any good at magic, kinda? His innate growth is low, sure, but I sing the praises of units like Ingrid and Bernadetta, who have 35% Str growths. The problem is that neither of his magic learn lists are particularly impressive. He's got boring fire magic, and Seraphim and Restore. None of those are really great applications of magic.

To make matters worse, if you want him to put his innate growths to work at where they excel best—axe and gauntlet use—but also keep his ability to use magic, you're stuck with War Monk, the worst of the Cindered Shadows classes. War Monk already compares unfavorably to Warrior and even Grappler, to say nothing of War Master.

Balthus's main asset, honestly, is his personal skill. King of Grappling is utterly ridiculous in the early and midgame. Drop Balthus to half health and suddenly he will shred anything in his path and take no damage from weapon users while he's doing it. Even in late and endgame, +6 Str and +6 Def is still a very good stat boost. If you're wondering why I like King of Grappling while I loathe the Defiant skills, it's because King of Grappling only requires half HP to activate, which is way less dangerous than the Defiant skills' quarter HP requirement.

In summary... Eh. Balthus is perfectly usable, no doubt. He's just not as distinguished from his contemporaries (Caspar and Raphael) as Yuri (Felix and Catherine), Constance (every magic user who isn't Hubert or Lysithea), or Hapi (Hubert and Lysithea).