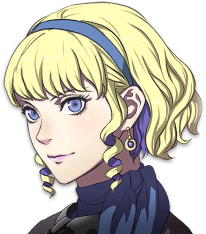 Circadian Beat: Grants Str/Mag +3 when the map is either indoors, covered in fog of war, or takes place at night. Grants Def/Res +3 otherwise.
Black/Dark Magic Learn List:
White Magic Learn List:
Unique Learned Abilities/Arts:
Remember how I said Lysithea was the strongest unit in the game? I have to retract that. After playing three routes with Constance, I strongly believe she either ties or even exceeds Lysithea for that title.

Let's get the negatives out of the way: Constance is defensively comparable to Lysithea, which is to say, she's made of soggy paper. She will crumple under the slightest bit of pressure from any weapon user. She's slow, too. Lysithea has a 50% Spd growth to make up for dark magic being heavy. Constance learns some of the heaviest black magic, but is stuck with a 35% base Spd growth. Lastly, her personal skill gives the lesser bonus (Def/Res +3) for most maps in the game, and the good bonus (Str/Mag +3) is heavily backloaded in Part 1. Hell, she only gets the good bonus for two routes' endgames, Crimson Flower and Azure Moon. Silver Snow and Verdant Wind are stuck with Def/Res +3.

So, why do I think Constance is good, even after all that? Well, she learns fucking Bolting. Bolting is ludicrous in this game, and she's the only unit with a Reason strength who learns it. You don't need much Spd at all, really, when your best spell has 18 Wt and can't double anyway. Constance can take her high Mag growth, and zap faraway units with it. Importantly, she can zap units two times a map as a baseline, compared to Meteor's one base use. When she's classed into Warlock or Gremory, she gets four uses of it, compared to Meteor's two. That's a lot of opportunities to take out a dangerous unit from long range, and she can get even more with her Crest of Noa. Got a weapon user who can't be safely baited out? Zap him! When they approach the unit you set out as bait, they'll die on the counterattack before they can kill the bait! Are you on Azure Moon endgame on any difficulty, or Verdant Wind endgame on Maddening, where you have to deal with a Bohr Χ user? Give Constance the Caduceus Staff (if she has Black Magic Range +1, for Azure Moon) or Thyrsus, and give the Bohr Χ jerk a nice ol' electric shock at a range even they can't counterattack from!

Even outside of long-range combat, Constance is no slouch. Sagittae lets her hit evasive targets, Fimbulvetr's got a nice 25 Crit attached to it, and Agnea's Arrow and its 16 Mt is there for when all else fails. Sure, that's not as good a toolset as Lysithea's Luna Λ + Dark Spikes Τ + Hades Ω, but it's still effective.

But really. Bolting is Constance's main thing. I cannot overstate how much having a Bolting user with a 60% Mag growth and the ability to get more than two/four uses of it per map makes certain strategies considerably safer. Lysithea has raw direct killing power, Constance has amazing indirect killing power. She's so good.