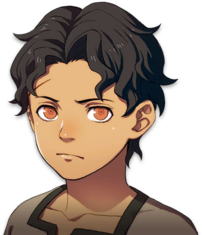 Aptitude: Makes each stat 20% more likely to increase on level up.
Black/Dark Magic Learn List:
White Magic Learn List:
Unique Learned Abilities/Arts:
Cyril gets a lot of flak as a unit and I'm not entirely sure why. Yeah, his unique abilities aren't the best, by and large, but who cares, he gets Point-Blank Volley. Any Brave effect combat art is powerful, and Cyril's got a pretty decent one. His Str growth is also not the best, but it's still 40% (after Aptitude). Ingrid's rocking a measly 35% Str growth on my Silver Snow run and look at how deadly she's turning out. He's also got a 60% Spd growth, the highest in the game, matched only by Petra, Ingrid, and Manuela. Combined, he has a pretty good shot of getting at least one of his important stats in any given level, which is comparable to units like Edelgard, Petra, and Leonie.

The worst thing I can really say about him is that Aptitude is pretty much a dead skill. All it does is make his growths normal, something that could've been accomplished by...making his growths equal to their Aptitude versions and giving him a useful personal skill. This isn't a Donnel or Mozu situation where they have decent growth rates on their own and Aptitude propels them to absurd levels, this is a "Cyril's growths got split between his bases and Aptitude" situation.