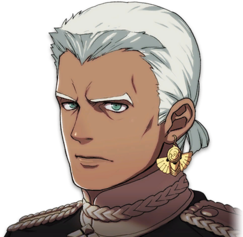 Staunch Shield: If unit takes no action except Wait, grants Def +4 for 1 turn.
Black/Dark Magic Learn List:
White Magic Learn List:
Unique Learned Abilities/Arts:
Dedue is an archetypal knight. High HP, Str, and Def, low Dex, Spd, and Res. The main thing he has over chumps like, say, Oswin, Gilliam, or whatever knight you may fancy, is that he has has Stalwart Shield. When Dedue's doing knight things, i.e. just sauntering forward and parking himself at the edge of the danger zone, he gets +4 Def, which is a significant buff earlygame and still noticeable later, especially against enemy gauntlet users. Beyond his prowess at physical defense, Dedue's also a good fit for the same niche that Raphael and Balthus occupy—low Spd, but high-Str axe and gauntlet users. Dedue especially is a decent gauntlet user due to his access to One-Two Punch, which is basically doubling your weapon uses for +8 Mt and +20 Hit. That's a pretty good trade!

The issue is that Dedue's archetype just...isn't that useful in Three Houses, especially on lower difficulties. On Maddening, there's an argument to be made for keeping Dedue, or a unit like him, around to counter enemy gauntlet users, but that's the extent of their big uses. Their strength against enemy gauntlet users is also counteracted by the fact that enemy archers have Poison Strike on Maddening, causing HP drain even if the enemy can't deal any damage to Dedue.

For Dedue personally, there's also the extra complicating factors of his riding and flying weaknesses. The man's basically locked into infantry classes. Wanna turn him into a wyvern rider or wyvern lord, get some big (if slow) flyer damage? Too bad, that's going to take way too much effort.

Still, even if Dedue will probably get outclassed by better units as the game goes on, he's still a lord's retainer—stick Dimitri with Dedue as an adjutant, and the prince'll get not only the usual support bonuses, but also a persistent Mt buff. Make sure you max out their support to do that!