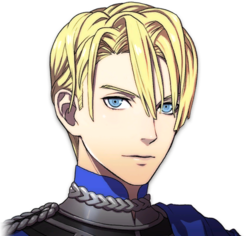 Royal Lineage: Multiplies experience earned by 1.2.
Black/Dark Magic Learn List:
White Magic Learn List:
Unique Learned Abilities/Arts:
Dimitri is a physical powerhouse. 60% base Str growth is unmatched by any other unit—only Edelgard and Felix come close at 55%—and his Dex and Spd growth are both high as well. Same with his HP, and his Def is decent enough to make him a good frontliner. Drop the man in front of any unit that's not a knight and he will lop off a large chunk of their HP, and probably double them too!

His aptitude is nice, but gets less relevant as the game goes on. For the first half, -1 Mv can be absolutely devastating for units' mobility, when they all have 4 or, rarely, 5 Mv, but in the later half of the game, when 5 and 6 Mv infantry start becoming more common, it's less great. It also barely does anything against fliers, since they just have Too Much Mv.

Special mention goes to his upgraded ability in Part 2, which gives him +20 Avo when at full HP. Combine this with a battalion that gives Avo bonuses, and Dimitri can become a ridiculous dodgetank with very little effort. Hell, you could have him win the White Heron Cup just for Sword Avo +20, turn him into Ferdinand++.

Dimitri's primary weakness is that he's weak at magic, both offensively and defensively. His Res growth isn't knight-level, but it's low enough that mages can roast him without much issue. His Lck is also low, potentially leaving him open to the unlikely-but-present threat of being crit by enemies. You're not going to be up against significant enemy crit chances in 3H, but even a 1% crit chance is still a 1% chance that you'll have to rewind and revise an otherwise-perfect strategy.