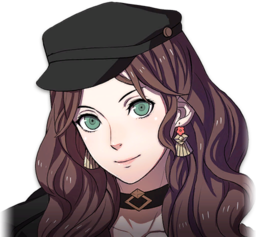 Songstress: Adjacent allies recover up to 10% of max HP at the start of each turn.
Black/Dark Magic Learn List:
White Magic Learn List:
Unique Learned Abilities/Arts:
Need something with low Res wiped off the map? You could do a lot worse than Dorothea. The woman's got decently high Mag and Spd, and a black magic learn list that's perfect for taking advantage of both. In particular, she's one of three spellcasters who learns a siege spell—Meteor—which has a lot of tactical applications. Need a far away enemy sniped? Done. Need a clumped-up group of enemies to lose chunks of their HP? Done. Wanna support one of your units who's fighting a boss? Donezo. For non-siege magic, Thoron also gives her some convenient extra reach, and Agnea's Arrow is a perfect spell for just nuking some poor sap.

On top of all that, her white magic learn list is small, but it contains Physic. Her high Mag and Res mean that she's an incredibly potent Physic user, which is always nice to have on a powerful magic attacker.

As for weaknesses, well, the big one is her Def. Dorothea will instantly melt the instant a physical attacker looks at her funny, so she'll always need a physically-beefy unit between her and enemies. Nothing particularly new for mages, but she's so especially weak to physical damage that it bears specifically noting.
Table of Contents