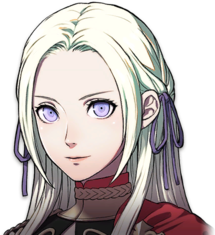 Imperial Lineage: Multiplies experience earned by 1.2.
Black/Dark Magic Learn List:
White Magic Learn List:
Unique Learned Abilities/Arts:
Edelgard is a bit odd. Her personal classes would make you think she's designed for tanking, but her sub-40% Def/Res and exactly 40% HP growths betray that. In exchange, her Spd's way higher than, say, Dedue or Raphael, and she has an almost 50% growth in...Mag?

See, here's the thing: Edelgard's actually an incredibly good option for a combination physical-and-magical damage dealer. Getting her to learn white magic is like pulling teeth (although doing so will reward you with Seraphim, at least), but she has an aptitude in reason, and therefore a basically-innate +10 Crit to black magic. The real draw is her upper-tier offensive magic; Luna Λ is an incredible tool to have, especially since she's got a high chance of having a beefy magic stat, and Hades Ω has the highest raw Mt of any magic. Her Str even helps negate the Wt penalty of Hades Ω!

Outside of magic, Edelgard's also a good physical unit. Like I said, her Def's a bit low for a standard physical attacker, but her Str growth is very high, and her Spd growth isn't bad. She comes with an innate specialization, of sorts, in axes, and there's no real reason to take her off them. If you want to use her as a tank, which you would admittedly be lacking in on Black Eagles otherwise, she does at least have Authority and Heavy Armor strengths, letting her equip battallions with high Prt/Rsl, and get the Wt reduction abilities, to at least give her a chance of doubling while wielding heavy weapons.

Her main weaknesses as a unit are her moderately weak defensive growths, her Faith weakness that you can't do anything about, and the fact that there's no classes that let her excel both physically and magically. Besides, like, Mortal Savant, I guess. Don't make her that, though. Don't make anyone a Mortal Savant. At least not until you're really close to Endgame, anyway. Anyway, if you want her to be able to use magic, she'll be stuck with 4 Mv until she gets either Gremory or Dark Knight, no thanks to her personal classes offering no way of using magic.
Table of Contents