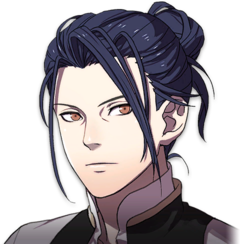 Lone Wolf: Unit deals 5 extra damage when no battalion is assigned or when battalion endurance is 0.
Black/Dark Magic Learn List:
White Magic Learn List:
Unique Learned Abilities/Arts:
Felix is to weapons what Lysithea is to magic—that is to say, he's arguably the best physical infantry. His 55% base Str and Spd growths mean that he'll pretty quickly grow into an incredibly fast murder machine, and that's helped by his Major Crest of Fraldarius, which gives him a 40% chance to deal 5 extra damage on any given hit. Point him at most non-knight units and chances are good they'll die in one round of combat when pitted against him.

He also has the ability to become an okay spellcaster, if you want. He gets Black Magic Crit +10 upon filling out his Reason aptitude, which is nifty. Mortal Savant kind of seems built for him, but at the same time, it's also bad because it reduces his Spd growth. If he classes into it from Swordmaster or Assassin, he effectively loses 30% Spd growth, which, uh. Yikes. He also only has access to a whopping two spells, but one of them is Thoron, at least, giving him 1-3 range with magic.

Balancing Felix's strengths is a slight fragility (though not too bad), and an Authority weakness. Authority weaknesses are awful, since battalions become really good not too far into the game, and contribute a lot on Maddening. Felix being stuck with low-rank battalions without spending a lot of instruction time on him is a pretty big flaw, especially since it means he misses out on battalions that can help compensate for his slight fragility.