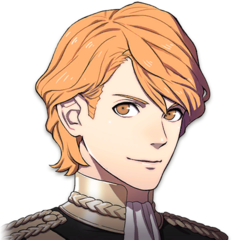 Confidence: Grants Hit/Avo +15 when unit is at full HP.
Black/Dark Magic Learn List:
White Magic Learn List:
Unique Learned Abilities/Arts:
Ferdinand is a physical damage dealer who can fill most melee classes very satisfactorally, and is naturally inclined towards being cavalry. He can equip whatever you want him to, between swords, lances, and axes, it won't take much effort to get him in a mounted class, and doing that will make him reasonably strong against physical damage.

His downsides are that he's very weak offensively and defensively when it comes to magic, and his Def growth without a class bonus is worrying. It's not inconceivable that he can end up screwed in multiple stats—I've had multiple Ferdinands that got off to abysmal starts and had to be benched—but the same can be said of multiple other good units. His natural strength as cavalry also means his Spd will probably end up pretty low, since all of the cavalry classes incur a Spd growth penalty.
Table of Contents