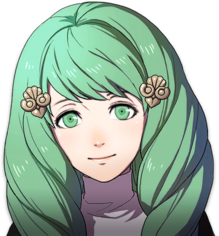 Lily's Poise: Adjacent allies take 3 less damage during combat.
Black/Dark Magic Learn List:
White Magic Learn List:
Unique Learned Abilities/Arts:
Flayn is... Aaaaaaagh. I want to like Flayn. I really do. She's the only viable user of Rescue in Three Houses, because the other character who learns it is Bernadetta for some ungodly reason, and she absolutely does not have the Mag to make proper use of it. She also has a really good personal skill that effectively grants everyone around her +3 Def/Res. But she's got major caveats that make it hard for me to recommend her.

Firstly, she's slow—and yes, other strong healers are slow too. Linhardt, Mercedes, and Marianne all have 40% base Spd growths, just 5% more than Flayn. However, what those three have that Flayn doesn't is Physic. Physic has way more general utility than Rescue, making units that have it easier to recommend. Rescue's range is also absolute shit for a long while, which means that even after Flayn learns it, it's going to be nigh-useless until her Mag gets high. At that point, what you're doing is carting Flayn around for several chapters, deliberately feeding her EXP (because she absolutely cannot one-round anyone and will die the second a physical unit gets in range of her), so you can...use Rescue. You could give that EXP to any other unit who can make better immediate use of it, who will still be useful in the long term.

If you do decide to invest the effort in Flayn, though, she will become incredibly useful. Her high Mag growth means that Rescue's range will become very big, eventually, her Res growth—the highest of any unit—means no magic user can even scratch her, and she caps off her Faith learn list with Fortify, aka Physic but it affects everyone in its range. Bishop and Gremory also increase Rescue's uses per map to 6, and Fortify's to 4, both of which combined give you a lot of room to play dangerously and still survive turns without any deaths. She unfortunately doesn't have the easiest path into Holy Knight, given her Riding weakness, but I think Gremory's white magic uses increase makes it way better for her anyway.

It is also worth noting that Flayn has a Mt-boosting support with Adan/Abby. If you don't mind using an adjutant slot on her, she can function as a permanent +3 damage for them.

In summary... Agh. Flayn's got a lot of potential as a good support unit, and she was a core foundation of my strategies when I first played the game, but she takes a lot of effort to get there—effort that, depending on your playstyle or preferences, can end up wasted anyway.