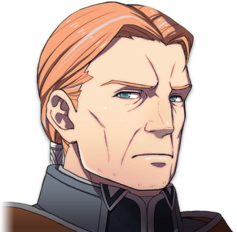 Veteran Knight: Unit takes 2 less damage while in formation with a battalion.
Black/Dark Magic Learn List:
White Magic Learn List:
Unique Learned Abilities/Arts:
Gilbert is the worst unit in the game. I'll be very upfront with that. His base growths are not acceptable for a unit that you only get access to on one route, and even then, only starting from Chapter 13. Adding insult to injury is that he is auto-leveled to the mid-high 20s in fucking Fortress Knight, and you have no way to avoid that. Auto-leveling is incredibly powerful and why I've seen people make the argument that you should hold off on recruiting Ingrid until near the end of Part 1 because...well, we'll get there.

The fact that Gilbert gets stuck with being a fortress knight for his auto-leveling completely removes any chance you have of making him someone that can use any weapon besides gauntlets and maybe axes. For a whopping 20+ levels, his effective Spd growth will be 0%—for reasons known only to the dev team, auto-leveling uses the enemy versions of classes, which have far more extreme stat growth modifiers. Enemy Fortress Knight, in particular, has a -30% Spd growth modifier, tanking Gilbert down to 0%, ruining any chance he has of ever not being doubled by anyone. Sure, he'll have lots of HP and Def, but even on Maddening, a unit does not need a lot of HP and Def to be able to survive the enemy phase.

Adding insult to injury is that Gilbert being limited to the last half of the game means that, even if you wanted to train him into a gauntlet user, you have to play shitloads of catch-up with him, demoting him to a brigand so he can get Death Blow, and then training him in gauntlets, which he does not have a strength in, unlike every other character with similar growths (Balthus, Raphael, Dedue, arguably Caspar). Oh, and the entire time you're doing this, you have to contend with the fact that, because Gilbert is not a student character, he's susceptible to getting one-stat levels.

The most I can say for Gilbert is that he's one of two units most suited to being a great knight—only Ferdinand also has strengths in Axe, Heavy Armor, and Riding all at once—even then, you'd need to unlock his aptitude for Heavy Armor to get the strength for it. This is damning with faint praise, however, because Great Knight is an abysmal class, and making a unit into a great knight is not something you should aspire to do.

Oh, and for the final insult, Gilbert's support list is abysmal. He supports nine other units, including Byleth. However, he only goes up to A ranks with three of them—Annette, Dimitri, and Byleth. His support with Annette is also Mt-boosting, but good luck taking advantage of that, given that Annette has her own severe problems with being used for actual combat.