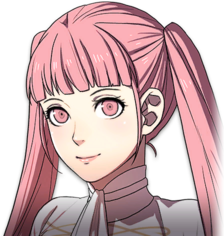 Advocate: Adjacent male allies deal 3 extra damage during combat.
Black/Dark Magic Learn List:
White Magic Learn List:
Unique Learned Abilities/Arts:
Hilda is meaty. 45% Str and 50% Spd is not only good, it's exactly equivalent to Ferdinand, known good-at-using-weapons man. She's got worse Dex, sure, but she also makes up for it with a 50% Cha growth, a number matched only by Yuri (a lord) and Anna (a joke character). Hell, not only does it beat Adan/Abby's Cha growth, it's only beaten by Edelgard, Dimitri, and Claude. Hilda can fuck some people up with weapons, and then turn around and get good Mt and Hit out of a gambit. That's a powerful set of skills to have, especially on Maddening, where high damage stats and Cha are beyond valuable.

Her only strengths are in Lance and Axe, but that's okay, because those two are the important skills for classing into fliers (especially Wyvern Lord, which requires both). If you're gonna be a physical unit with only two strengths, those two are probably what you'd want most.

Oh, and if you feel like making her a mage, for...some reason, she learns fucking Bolting at Reason A. Bolting is never a bad thing to have, even when the holder only has a 25% base Mag growth.

Also worth considering is the fact that she's got two Mt-boosting support options: Claude and Balthus. If you feel like taking her down the path of Bolting, she can provide long-range Mt boosts to those two.

Now, what are Hilda's downsides? Well, the Authority weakness is a big one. Getting Hilda to Authority C, where she can start actually putting that Cha growth to good use, is like pulling teeth, and Authority B (where you can use the really good battalions you get from paralogues) is even worse. Her low Dex growth, combined with axes' natural inaccuracy, also means she has an unfortunate tendency to have lower Hit chances than most other units. Oh yeah, and she also can't be recruited for most of Part 1 if you're playing as the Black Eagles, and can't be recruited at all if you opt to side with Edelgard. That's...inconvenient.