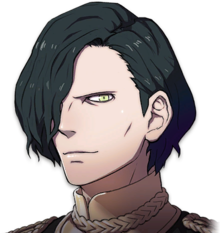 Officer Duty: Grants Mt +5 with gambits.
Black/Dark Magic Learn List:
White Magic Learn List:
Unique Learned Abilities/Arts:
Hubert's built for being a dark magic user, and very little else. Compared to Lysithea, his dark magic learn list is more oriented towards support-y effects: Mire Β both lets him get an extra tile of range, and heavily soften up targets, and Banshee Θ lets him trap problematic units for one turn, or at least heavily reduce fliers' Mv. Him getting Dark Spikes Τ really late is...a bit odd, especially since cavalry kind of dry up towards Endgame, but having it is better than not.

His aptitude is pointless. Putting him in melee range of any enemies is dangerous, and it's not even a decent anti-mage option, since it attacks against Res. Don't bother. At least turning Lances into a strength means Hubert has an easier path to Dark Knight.

As for weaknesses, well, the man is incredibly frail. His HP growth is low and his Def growth is even lower. Even against other magic users, he can be put down to dangerous HP levels solely due to his low HP. His faith weakness also means that getting him some supporting utility will take a while. At least he gets Recover.
Table of Contents