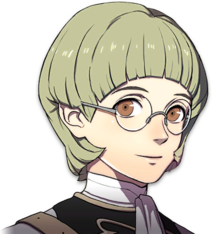 While that sounds pretty innocuous, it...really isn't. Bernadetta can get by on her low Str growth through having an easy way to give herself +5 Atk. Ingrid can get by on her low Str growth by being easily slotted into any flier class. Ignatz doesn't have either of those. What he has is an accuracy bonus that helps a lot in the earlygame, but will quickly fall off in usefulness, leaving him to rely solely on his stats if he wants to have any chance of being useful.

So, what do his stats tell us? His HP growth is fine for a unit who shouldn't be seeing melee combat. His Str I already talked about. His Mag is okay enough that you could feasibly make him a magic user (he'd actually do pretty well with Fimbulvetr, given that Watchful Eye compensates for his low accuracy). His Dex, Spd, and Lck are all good—which gives him decent odds at having high natural Crit. His Def growth is mediocre, for what little it matters, his Res growth is passable, and while his Cha growth is bad, he does have an Authority strength to compensate for it. So, his anciliary stats are fine—good, even. But Dex, Spd, and Lck can only do so much for you if your Str/Mag growths fail.

Hm. Y'know, thinking about it as I'm writing this up, I probably should've tried sending him down the path of Swordmaster/Mortal Savant. Swordmaster would've pushed his Str growth to 45%, and his Spd growth to a whopping 70%. He'd have decent odds of becoming a better classical Myrmidon/Swordmaster. Too bad I didn't try that in the LP. Oh well.