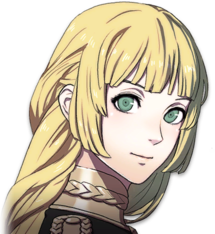 Lady Knight: Grants Mt +3 and Hit +5 with gambits.
Black/Dark Magic Learn List:
White Magic Learn List:
Unique Learned Abilities/Arts:
Ingrid is a very versatile unit. Her growths are overall pretty high, with slight weaknesses in Str, Mag, and Def, strengths in both Riding and Flying, and no weaknesses. In particular, with regards to her growths, her Cha growth is only bested by the lords, Hilda, and Manuela, and her Spd growth is tied for highest in the game with Petra, Leonie, Manuela, and Cyril. She can double most any enemy she comes across, and while 35% Str/Mag isn't spectacular, they're workable, and can always be bumped up with stat boosters.

Her "intended" path is through the physical flier classes—Pegasus Knight, Wyvern Rider, and either Falcon Knight or Wyvern Lord. This is also, generally, what she excels at. She can zip around maps, doubling everything, and then get to safety—or dodge a lot of counterattacks on the enemy phase due to her high Spd and the pegasus classes having innate Avo +10. She doesn't even have to put her Mag growth aside for these, since her Sword strength lends itself well to the Levin Sword, giving her a nice option against units with high Def but low Res.

We shouldn't neglect magic-using classes, though. Both her Reason and Faith learn lists are very strong individually, and even better when combined. Ingrid has access to Blizzard and Fimbulvetr—both of which have lower Mt than other spells at their respective "tiers," but have high Crit to make up for it (Blizzard has 15 Crit, Fimbulvetr has 25)—alongside Thoron, which gives a nice mixture of high Crit and 1-3 range reach. On the white magic side, she has access to both Physic and Seraphim, letting her provide remote healing support, and shred Monster enemies to bits. She unfortunately doesn't get a high-tier white magic spell, but her general versatility soothes the pain of that.

In general, you really just can't go wrong with using Ingrid. Unless her Str and Mag growths both fail on you too much, which is a real possibility. In that case, I guess she'd be useless. I've yet to have that happen, though—and like I said, greenhouse stat boosters can always help with that.