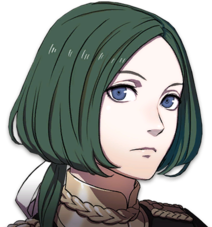 Catnap: If unit takes no action except Wait, recovers up to 10% of max HP.
Black/Dark Magic Learn List:
White Magic Learn List:
Unique Learned Abilities/Arts:
Linhardt is a pure spellcaster, plain and simple. He has strengths in the two things that matter, Reason and Faith, and he's got impressive learn lists for both. Excalibur makes him a real threat to fliers—even Res-heavy Pegasus Knights—and his white magic list contains Physic and Warp, both always very useful, and Restore, which is situationally useful. His Spd growth is enough that he has room to miss it quite a bit, and still avoid being doubled by enemies. I wouldn't expect him to do a lot of doubling, though.

Going back to his learn lists: Physic and Warp would automatically make him an incredible asset as-is, even if his black magic learn list wasn't as great as it is. Physic is always an important tool for keeping distant units alive, even without a healer in their direct midst, and Warp means he can do a lot for helping offensive units get to where they're going incredibly quickly.

His primary issue is that his HP is low. Like, really, really low. His Def is workable and his Res is good, but both of those do not amount to much if your HP is low. Always make sure there's enough room between him and enemy combatants, or else you might end up with a very injured (potentially dead) Linhardt on your hands.
Table of Contents