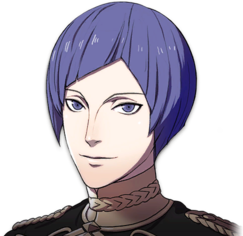 Whoops, not talking about him as a character here, I'm talking about him as a unit. Lorenz is one of the extremely rare characters in Three Houses who can genuinely be molded into whatever you'd like. His growths are average all around, he's got strengths in both a weapon type and Reason, and he's plenty durable for the front lines, between his high HP, decent Def, and surprisingly good Res. He only has access to pretty plain black magic, although he does learn the 15 Mt Ragnarok surprisingly early.

Being able to do everything can be a curse, though, and Lorenz is no exception. While he can do whatever you throw him at, he's probably not going to be as good at it as a specialized unit is. Training him in other weapon types and in flying isn't hard, but it's noticeably slower compared to someone who has strengths in the applicable skills. It's also entirely possible that his average growths just kinda fail all-around, leaving you with a unit who...isn't good at much of anything.

A special note goes to his ability to use magic: Lorenz shares the same problem that all male spellcasters do in Three Houses, and that's lacking any decisive endgame class. Dark Knight is there, sure, but it's not a great option, in my opinion, given that Lorenz will get three shots of Ragnarok and two shots of Agnea's Arrow before he's left with just Fire and Sagittae. Leaving him in Warlock is an okay option, but then you're stuck with a 4 Mv infantry unit at endgame; a serious problem if the rest of your team is cavalry and/or fliers.