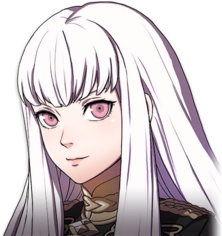 Mastermind: Doubles skill experience earned in battle.
Black/Dark Magic Learn List:
White Magic Learn List:
Unique Learned Abilities/Arts:
Lysithea is, in my opinion, the strongest unit in the game. Accept no substitutes. She has a 60% base Mag growth, which even Mage, the Intermediate Reason class, buffs up to 70%. She also has a similarly-high Dex growth, giving her a decent stock of Hit. Accompanying both of those is a 50% Spd growth, comparable to Felix and Catherine, noted fast units, who have 55%. None of the magic-using classes amplify it, sadly.

She also has access to dark magic to really work those excellent offensive growths. Swarm Ζ lets her debuff the Spd of any unit she can't finish off, Luna Λ lets her still hurt enemies with high Res (though not much, since it can't double), Dark Spikes Τ will reduce any cavalry unit to dust, and Hades Ω is there for when all else fails—heavy as all hell, but packing 18 Mt and 10 Crit. Her white magic is no slouch either, boasting Seraphim to help her shred Monster enemies, and Warp, which helps allied units move great distances in one go.

(For the uninitiated, regarding Luna Λ: Luna Λ has only 1 Mt, but has the special property of ignoring the target's Res, effectively making its Mt equal to 1 + Target Res.)

Her personal skill also lets her gain high skill ranks and, more importantly, master classes faster than anyone else in the game. With the Saint Cethleann Class Exp +1 bonus, Lysithea gets 4 class mastery experience per battle. Even Master classes would only take 50 rounds of combat to max out with that, and it can be boosted even higher with Knowledge Orbs, which we'll obtain further down the road. Getting skill ranks quickly also means she gets Dark Magic Range +1 more quickly than other magic users will get their range booster, helping compensate for magic classes' lower Mv, or if she's in Dark Knight, giving her absolutely comical reach.

And good thing, too, because you really want to keep Lysithea out of counterattack range, and enemy units that can attack her in general. By now, you've probably noticed her atrocious defensive growths; 20% HP, 15% Lck, 10% Def, and 25% Res. It's dangerous to leave her in range of even enemy magic users, since her Res doesn't amount to much and she's going to be stuck with low max HP anyway. Yeah, most magic users are frail, but they can usually survive one physical hit (note: one. Doubling will usually get them killed), and can at least take little damage from other magic users. Lysithea does not even have that, which unfortunately means she's kind of really bad for enemy phases, and in general bad for defensive strategies that result in multiple enemies being uncomfortably close.

That low Lck growth is also unfortunate, since it means her high Dex growth only results in Crit chances that are about on par with other units. At least being crit isn't that much of a problem for her, since her getting hit at all will probably result in a death anyway...

Oh yeah, her low Str and the heaviness of most of the spells she learns means that she can have issues doubling if you don't get her the Weight reduction passives and some Spd boosters. She'll gain, on average, 6 Str throughout 40 levels, which will put her at 2 Wt offset. On average, at level 41, she'll still be weighed down to the tune of -3 AS by Miasma Δ, to say nothing of Seraphim (-8 AS), Dark Spikes Τ (-9 AS), Abraxas (-11 AS), or Hades Ω (-16 AS). At least you don't have to worry about Luna Λ, because that can't double anyway!

Then again, do you really need speed when you can reliably kill most any enemy in one shot anyway?