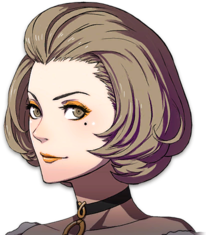 Infirmary Master: Adjacent allies gain Crit Avo +10 during combat.
Black/Dark Magic Learn List:
White Magic Learn List:
Unique Learned Abilities/Arts:
Manuela is a weird, weird unit. Statistically, she resembles Ingrid most, just with a slight boost to her Cha growth in exchange for less Lck and much less Res. Ostensibly, she's sort of meant to be used as a magic swordswoman, but the Reason weakness and her lackluster Reason learn list put a damper on that. As a healer, she's...also not great! She lacks access to Physic or even Restore, and instead has Ward, Silence, and Warp. Silence and Warp are fantastic utility spells, don't get me wrong, but it's odd that someone who runs the Garreg Mach infirmary is bad at actually healing.

What can you do with Manuela? Well, you can ignore her spells and just slam her into Swordmaster and/or Assassin. She might not have the highest Str growth, but she'd be fast as fuck, able to double basically everything that comes her way, even on Maddening. That high Cha growth also means she'd do pretty well at both dodging enemy gambits and using her own effectively. If that doesn't sound enticing, you can just do what the game expects you to do with her and use her as a pure support unit with a sword for some self-defense. Ward is incredibly situational, but Silence and especially Warp are valuable.

A positive aspect of Manuela, as a unit, that I'd be wrong to ignore is her support list. Manuela's got supports with noted very good units Edelgard, Ferdinand, and Seteth, and has a Mt-boosting support with Dorothea. If you really want to, you can drag her to Reason A to get her Bolting, which would give her the ability to give long-range support bonuses.

Manuela isn't the best unit, or even that generally good, but she's got points in her favor, which is more than I can say for certain other units.