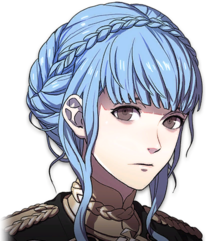 Animal Friend: Unit recovers up to 20% of max HP at the start of each turn when adjacent to a cavalry or flying ally.
Black/Dark Magic Learn List:
White Magic Learn List:
Unique Learned Abilities/Arts:
Marianne is like Mercedes, but different. She trades Restore and Fortify for Silence and Aura, and has decent offensive capablities, thanks to learning Blizzard, Thoron, Fimbulvetr, and Aura.

Let's talk about her most major thing: Silence. She is one of three units that learns Silence—the others being Claude (?!) and Manuela. Silence lets her completely disable all magic on an enemy unit for 1 turn, within a 3-10 range. I have never seen it with below 100 Hit, and it has 3 uses per battle (6 with Bishop or Gremory). While some of the more dangerous magic-using bosses have Unsealable Magic, which means they can't be silenced, several dangerous non-boss magic users, and even some boss magic users, don't, leaving them wide open to being Silenced and therefore rendered harmless. Again, you can do this 3 or 6 times in one battle. There's a lot of good ways to abuse this, the most obvious one being that you can silence a magic user that will get a heavy counterattack in before they die. You can also use it to make a reckless charge into an enemy formation much safer! It's wonderful.

Oh yeah, and Aura. Aura is a Killer weapon but as white magic, basically. 12 Mt, 70 Hit, 12 Wt, oh and 20 Crit. It's comparable to Fimbulvetr, and can be treated as a replacement for it. It's nice.

As for her downsides... Well, Marianne is about as fragile as most other magic units, that's nothing new. Her personal skill is pretty garbage. That's...about all I can think of. Besides those, she's a pretty good utility unit with the capability to get some big crits in.