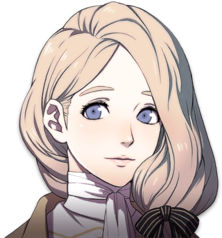 Live to Serve: When healing an ally with white magic, unit recovers the same amount of HP.
Black/Dark Magic Learn List:
White Magic Learn List:
Unique Learned Abilities/Arts:
Mercedes is about the cloesest thing Three Houses has to a pure healer. Offensively she's...okay. She doesn't really learn any outstanding spells, and what she does learn is on the heavier side of black magic, so she has issues doubling anything. All of this is fine, because she is pretty much unmatched as far as healing goes, thanks to her learning Physic, Restore, and Fortify. She can heal anyone from anywhere, and once she reaches Faith A, heal up pretty much everyone in the battle. Restore is there too, just for that extra bit of "removing rattled status and Seal debuffs" utility. She also has a slight bit of offensive utility with Waning Shot. -5 Str not only means the target deals 5 less physical damage that turn, but they lose 1 Wt offset. Given that basically no enemies in the game completely offset their equipment Wt through Str alone, this usually means they suffer -1 AS too.

I don't have much else to say about her, really. She pretty much always ends up on my endgame teams, because getting Physic is plenty good, and then getting Fortify at the end of Faith is even better. About the only major criticism I have of her is that her Lance weakness means putting her in Holy Knight is awful, but I usually want Gremory on her anyway becaues that means 4 uses of Fortify per battle.