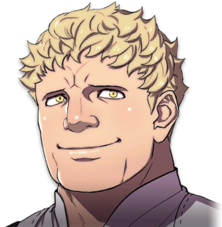 What's the big Raph man do well? Meaty hits. He will get a lot of Str, and it is your job to decide what to do with it. Gauntlets pair well with high-Str low-Spd units, since if you can't double naturally, you might as well just hit them with gauntlets! Of course, the axe option is always there for if you just want one single big hit. Raphael is good at both of those things! In particular, he makes for an excellent mage-slayer. Send him at a magic user while armed with a pair of gauntlets, and he'll probably pummel them from 100 to 0 no problem. Just...make sure he doesn't eat a counterattack from them.

The food-loving muscle-training guy's also excellent when it comes to physical durability. His HP growth is unmatched, with the only units who come close being the likes of Dimitri, Dedue, and Sylvain. His Def growth is equal to Balthus and Mystery Spoiler Man, and is only beaten by Dedue. Physical units will have an extremely hard time scratching the guy, and will probably eat one (and only one) big axe hit in return.

Now, uh, as you've probably already noticed, Raph's got problems. Namely, while he's good at taking physical hits, he's not much good at taking magical hits. At all. He might have the HP to survive one (1) spell being thrown at him, but the issue is that he will almost certainly get doubled by even the heaviest of magic, which will almost certainly drop him to 0 HP. In general, Raph doesn't do well against speedy units. Or...anyone with even reasonable Spd. He gets doubled by damn near everything in the game, almost requiring gauntlets if you want him to actually have killing power by the end of the game. Quick Riposte can solve that problem, though, if you're using him for counterkills during the enemy phase. Trouble is, uh, that comes really late in the game. He's probably one of the best units in the game for it, and his path to War Master is not difficult at all, but do consider whether or not something you'll only get in, like, Chapter 19 at the earliest is worth it. On Maddening, you'll be barely scratching the 30s by endgame, so...