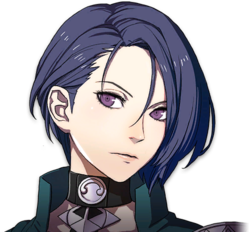 Survival Instinct: If unit initiates combat and defeats foe, grants Str/Mag/Dex/Spd +4 for one turn.
Black/Dark Magic Learn List:
White Magic Learn List:
Unique Learned Abilities/Arts:
Shamir is a bow user with reasonable offensive growths, poor defensive growths, a pretty decent stock of Crit thanks to high Dex and Lck, and also she is an absolute monster during the enemy phase due to her personal skill. If she gets a kill during the player phase, which isn't all that hard, she gets the following: +4 Atk, +4 Hit, +2 Crit, +4 AS, and +4 Avo. Also, it's +5 AS if her Str isn't a multiple of 5 and she's weighed down by her equipment. Give her some HP, Def, and Res stat boosters, Close Counter, a good bow, and a kill during the player phase, and she will shred most anything that tries to attack her during the enemy phase. +4 Atk and +4 or +5 AS is a lot of extra killing power.

Oh, and if you had the ability to give her an extra turn—say, with that fancy Dancer class that was in previous FE games—you can also use her buffed up stats to get another kill before the enemy phase happens. Sadly, Survival Instinct cannot stack with itself. I don't think it can stack with Rally either, but don't quote me on that. I'm sure I'll figure out the answer to that as the LP goes on.

However, she does really need those stat boosters to become an effective enemy phase killer. 35% HP, 20% Def, and 15% Res are absolutely not enough to weather more than maybe one attack before she bites it.