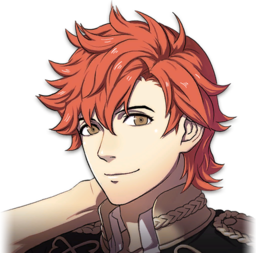 So, let's get one thing out of the way first with him: physical damage dealer, or magic damage dealer? He comes with a Reason aptitude that bestows Black Magic Avo +20, which I would argue is a better bonus than Black Magic Crit +10, but his base Mag growth is worryingly low. When classed into a magic-using class, however, it is bumped up to 40%. The question then becomes "in this game of characters who have high growths for their primary attacking stat, am I willing to invest in a unit who will only ever have a 40% chance of gaining his primary attacking stat when leveling up?" You can shore it up with stat boosters if it doesn't turn out well, as well as Fiendish Blow, I suppose.

In Magic Sylvain's favor is the fact that, if you make him a spellcaster, he's one of the fastest in the game—at least among people who have black magic learn lists larger than two spells. He's tied with Lysithea for the fastest magic user amongst that aforementioned group. His Str growth also compares extremely favorably compared to most of them, meaning he'll often be weighed down less by his spells. Going back to Lysithea, she has a 15% Str growth—hence why she often ends up being incredibly slow, even though her Spd growth is 50%. Sylvain also makes for a decent backup healer, what with getting Physic and all.

His strengths also give away that he can easily slip into a cavalry class, if you want to. I, however, have an aversion to that, because I've tried that three times with Sylvain in my personal runs, and it never turns out well. The guy always ends up too slow to be anything but a liability. Cavalry classes bump his speed down to 40%, same as his magic-using class Mag growth, yeah, but being deficient on Spd is arguably way worse than being deficient on your attacking stat. At least being deficient on your attacking stat doesn't leave you wide open to getting killed.

Going back to his other growths... Well, his Dex growth is low. Worryingly low. In addition to being too slow to be anything but a liablity, in my previous runs, Sylvain often has problems even just hitting things. Which, y'know. Not great. His Res growth is also naturally low, which leaves him to being melted by magic users.

If I sound overly harsh on Sylvain, well, maybe I am. Part of it is just inherent bias because Cavalier Sylvain has failed me three times now. Part of it is that, even if numbers in a vacuum don't always tell the whole story, they are still part of the story, if that makes sense. I'm definitely willing to give him a shot as a magic user, and even as a cavalier when we join the Blue Lion House, but I don't have high hopes.
Table of Contents