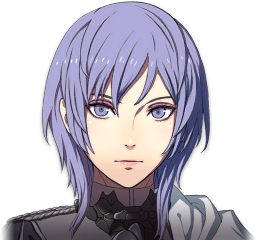 Honorable Spirit: If unit is not adjacent to an ally, grants Atk +3 when in combat with a foe one space away.
Black/Dark Magic Learn List:
White Magic Learn List:
Unique Learned Abilities/Arts:
Yuri is an odd duck amongst other Three Houses units: he's a speedy swordsman who can also wield magic. He can wield it very well, in fact: wind magic packs a decent punch along with being lighter than other types, and Excalibur means even high-Res pegasus knights die pretty easily. His white magic list is no slouch, either, what with getting both Recover and Silence. Even a low-Mag unit can still provide a really good heal through Recover.

You don't have to make use of Yuri's magic, though—like I said, he's a speedy swordsman as well. 40% Str is acceptable, it's comparable to noted good unit Leonie, and his 65% base Spd growth is literally unmatched. Only Ingrid, Leonie, Manuela, and Mystery Spoiler Man come close at 60%. Even on Maddening, Yuri will not have any trouble at all doubling damn near anything he comes across. He's also naturally evasive as a result, between Sword Prowess prioritizing Avo, swords being lighter than other weapon types, Axebreaker, and his Crest of Aubin, which gives him a 20% chance to cancel upcoming enemy attacks. Oh yeah, and he gets a free +3 damage when no-one's adjacent to him and he's at melee range. Even if his Str growth falters, that can help make up for it—it's +6 total damage when just doubling normally, and +12 when using a brave weapon.

Also, this deserves special attention: Yuri learns Windsweep. Windsweep is fucking broken. Adan/Abby learn it too, but I neglected to mention there, so I'll mention it here. In a game where bosses and even subbosses can be dangerous to approach, Windsweep lets you deal one hit's worth of damage, plus 3, consequence-free. Enemy's evasive? You've got +20 Hit! Got a wo dao+ or the cursed Ashiya sword+ equipped? You get +10 Crit on top of their ridiculous innate crit bonuses! Oh, and on top of all that? Yuri learns Windsweep comically early compared to the other three units who get it (Adan/Abby, Dimitri, and Mystery Spoiler Man), who all learn it at Sword A. Yuri can reach Sword C+ by chapter 3 or 4, given that he's got a strength in it and starts at D+.

Also, one last perk: Yuri's, essentially, the fourth lord of the game, so he's got an Authority bonus and has a high Cha growth, making him an excellent gambit user, even on Maddening. Sadly, he does not have access to the Lord class.

So, what are Yuri's downsides? Well, his HP growth is abominable for a unit meant to fight weapon users at melee range. If his evasion fails him, he's going to have less HP to fall back on than other units. His satisfactory Def and Res compensate for that, but it's still a pretty big issue. More pressing, however, is the fact that classing him into anything that isn't a magic-using class or Swordmaster/Mortal Savant is infuriatingly hard, borderline impossible on a normal run of the game. He's got weaknesses in Lance and Axe, and more worryingly, Riding and Flying—he's got weaknesses in everything you need to class into Wyvern Rider and Wyvern Lord. Yuri's effectively locked into infantry classes, and mediocre ones, at that. To me, his natural stats and early Windsweep access carry him through that, but I can very easily understand why you'd just immediately bench him on a Maddening NG run if he doesn't get an amazingly strong start.