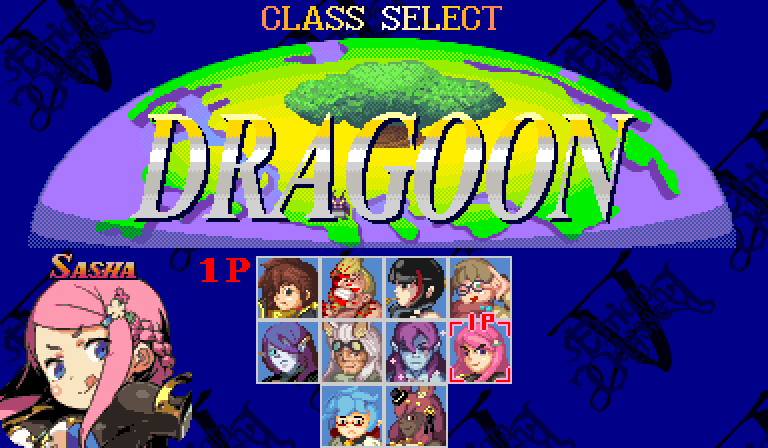 Dragoons are the primary defensive support class of EO5. Those of you coming from EO4, no, they're not really like Fortresses. Fortresses were am interesting but ultimately failed experiment in making a defensive support class focused entirely on tanking, whose only damage mitigation, if you could even call it that, was just some defensive buffs. Dragoons are more akin to Protectors (EO1/2) and Hoplites (EO3)--they specialize in direct damage mitigation. What makes them different from those two, you might ask? Guns! ...Well, heavy artillery, but you get the point. Unlike Protectors (but not unlike Hoplites), Dragoons can equip ranged weapons, and putting one in the back can actually work quite well (I still put them in the front both of habit and for the innate enemy aggro increase). They also have access to quite a few attack skills, which are somewhat hampered by guns having overall bad ATK, but not unusably so. 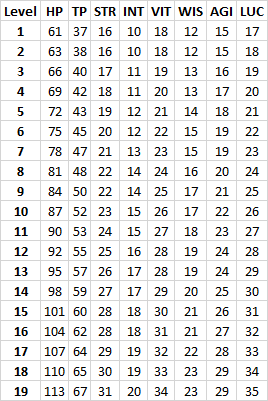 Adamantine Dragoon: Doubling down on defenses

artillery, and can wear

In terms of potential reclass options... Uh... A Brownie could do okay as an Adamantine Dragoon, I guess? Somewhat? Their HP is pretty abysmal compared to Earthruns, but their TP and WIS are better, and their VIT's comparable. Much like other damage classes, you could do worse than using a Therian for a Gunpowder Dragoon, but given that two of their four big direct attack skills inflict ailments, the LUC loss could be bad. You'd also end up with someone that's much more fragile when actually using shield skills.

Decreases physical damage taken when equipped with a shield.

Reduces physical damage taken by one row for one turn. Has standard priority.

The most basic of the shield skills, and also the most important. Chances are good that if your Dragoon has nothing else to do, they'll be using this. It's good for random encounters and bosses that rely heavily on physical attacks!

Reduces elemental damage taken by all party members for one turn. Has standard priority.

The replacement for the elemental Walls (or Anti skills, as they're known in the DS games). It covers each of the elements, but doesn't fully cancel out attacks at rank 10--a very, very good trade, in my opinion. The problem with the Walls was that they'd only ever be really useful if you already knew a boss's pattern in advance, and even more than that, their usefulness was directly proportional to how unpredictable they are, and how much their other potential actions could hurt.

Reduces physical damage taken by the caster for one turn. When the user takes damage while Healing Guard is active, their HP is restored. The restoration is a static amount plus a percentage of the caster's maximum HP. Has standard priority.

Ehhhhhhhhhh. Pretty obviously intended for use with's Dragon's Roar. You have to ask yourself if using this thing is worth leaving other party members without protection, though.

Can only be used on the turn after a shield skill was used. Deals ranged STR-based bash damage to one enemy. Replicates the effect of the shield skill used on the last turn--this takes effect immediately, and does not depend on when the user attacks. Has +5 base accuracy at all levels.

Gun Mount was one of the first Dragoon skills revealed to the public during EO5's prerelease press period, if I remember correctly, and it was what convinced me that I'd actually want to use them. Gun Mount not only gives Dragoons a chance to chip in damage without neglecting their normal duties, it also saves them an absolute ton of TP in the long run, especially when it comes to some of the Adamantine Dragoon skills.

Deals ranged STR-based bash damage to all enemies. Reduces hit targets' physical attack for a set amount of turns. Has an 80% speed modifier and no base accuracy modifier at all levels.

Pass. Costs way too much TP for what it does.

Increases one ally's defense against physical attacks and chance of being targeted for a set amount of turns.

Oh hey, it's Provoke/Taunt again, except it has the "can be used on any ally" thing from Decoy Sign. I tend not to use Provoke-like skills too much, but Dragon's Roar has its uses in EO5. You can target it with a Fencer that's trying to dodgetank, for example, and basically guarantee that all single/random-target attacks will go to them.

Creates a Bunker in the summon row. The Bunker has 10 HP. In addition to having a DEF value, the Bunker also has a set resistance to all damage. The Bunker has an increased base chance of drawing enemy attacks. Has a 125% speed modifier at all levels.

A somewhat strange alternative to Dragon's Roar, kinda. The Bunker is actually pretty damn tanky, given that even at levels 1-4, it only takes 6% damage from everything. For reference, 6% of 150 damage (which is a ton of HP up until [i]maybe[/i] the end of the 3rd Stratum) would deal 9 damage to the Bunker, before factoring in DEF. In addition to this, the Bunker drawing aggro onto the summon row can be really nice...if you don't have a Necromancer or a Hound. If you don't, great, the Bunker can just keep drawing single-target and, importantly, row-target attacks away from your party. If you do, though, ghosts, hawks, and dogs are gonna be eating a lot more damage than normal.

Increases all party members' defense against physical attacks for a set amount of turns. Can only be cast if a Bunker is currently summoned. Has an 80% speed modifier at all levels.

Reduces physical damage taken by one row for one turn. Allies under the effect of Recovery Guard also have a chance to have a set amount of binds removed when Recovery Guard takes effect. If a character has more binds than Recovery Guard removes, which binds are removed is random. Has standard priority.

I could see Recovery Guard's use as a panic option, like if your front row has binds but also needs healing, of which the latter would probably be an Herbalist's priority. On the other hand, the damage reduction's quite a bit less than Line Guard, so it's not a full-on replacement for it.

Targets one ally. The caster will take all damage for that ally for one turn. From levels 2-10, the caster takes reduced damage from attacks redirected by Divide Guard. Has standard priority.

Eh. There's not a lot of instances in EO5 where I'd say you really want to protect one party member instead of a row or the entire party.

Reduces all cut, stab, bash, fire, ice, and volt damage to the party for one turn. After use, Full Guard goes on cooldown for a set amount of turns. Has standard priority.

Costs a boatload of TP at all levels, has a giant cooldown, and is still useful for a lot of situations. It's not [i]quite[/i] as good as Material Guard if you're blocking fire/ice/volt damage (it'd be dumb if it was), but eh. You have to be really sure about when to use it, like I said, because that TP cost is fucking massive. At level 60 (a decent level for fighting the final boss), without a TP Up weapon, an Earthrun Adamantine Dragoon will have 165 max TP. The one saving grace of all of this is that, despite the cooldown, you can replicate the effect of Full Guard with Gun Mount--for far less TP, too!

Reduces STR-based damage taken by one row for one turn. Allies under the effect of Soul Guard have a chance to survive mortal damage at 1 HP. Has standard priority.

Kind of like a one-turn CPR (or Dauntless Order, to a lesser extent) that also reduces physical damage. You could conceivably make use out of it when dealing with bosses that have single or row-target overkill skills, although whether you want to bet on a 66% chance at rank 10 is your own decision.

Deals ranged STR-based cut damage to one row of enemies. Shield Throw uses some function of the user's equipped shield's DEF as a substitute for weapon ATK. Has a 60% speed modifier and 75 base accuracy at all levels. For comparison, swords have 97 base accuracy.

...Okay? Why would I want to use an attack skill that effectively has -20 base accuracy?

Gives the user a chance to use Dragon's Roar on themselves at the start of battle.

Gives a chance for the user and any party members in the opposite row to nullify physical damage.

Not too hot on Dragon Force. Dragoons do end up needing quite a lot of skill points, and investing 10 of them for what works out to a 15% defense buff isn't my idea of good.

Gives the user a chance to use Bunker at the start of battle.

Increases the damage of artillery skills when either a shield skill activates, when a Bunker or Pillbox is attacked, or when a Union skill reduces an attack's damage. The bonus resets when an attack has the bonus applied to it.

A pretty good passive that unfortunately doesn't let you have permanent 2.5x damage, although I suppose that would be pretty silly.

Increases the damage, non-base accuracy, and speed of the artillery skill used on the next turn. Has no speed modifier at all levels.

One of two unconditional charge skills in the entirety of EO5, and this one's pretty decent, aside from its somewhat steep TP cost. Worth investing in once you've got all of the Cannon skills that you want.

Deals ranged STR-based bash damage to one enemy. Has absolute priority and +20 base accuracy at all levels.

Deals the most damage of the three basic Cannon skills, although that's not saying a lot, given that Gun Mount deals more at rank 10, and replicates shield skills too.

Deals ranged STR-based bash damage to one enemy. Attempts to inflict curse on the target. Has a 60% speed modifier and no base accuracy modifier at all levels.

Curse is an absurdly trash ailment, that's all I really need to say.

Deals ranged STR-based bash damage to one enemy. Attempts to inflict sleep on the target. Has a 60% speed modifier and no base accuracy modifier at all levels.

I'm gonna be blunt: Buster Cannon is far less good than it may seem. My first thoughts when I looked at its data were "holy shit this is Front Mortar all over again," but the fact that it effectively eats two turns means that your Dragoon's effective damage per turn is half of whatever Buster Cannon advertises on the tin. Still the best option for having a Dragoon deal damage, but I really would be careful about casting it without having debilitating disables on the enemy.

Bunkers, but with less enemy aggro, and with the ability to counterattack. 500 ATK is a lot, incidentally--it's equivalent to a character with 250 STR, equipped with a 250 ATK weapon, performing a normal attack. I really like Pillbox, honestly, but that rank 10 TP cost is a [i]little[/i] steep.

When the user reduces damage they themselves take, or negates an attack entirely (ie. another Dragoon activating Dragon Force), they have a chance to create a Pillbox.

34% (at most) chance to create a Pillbox for free when the user reduces damage to themselves (that second condition is almost guaranteed to never activate)? Sure, why not.
Table of Contents