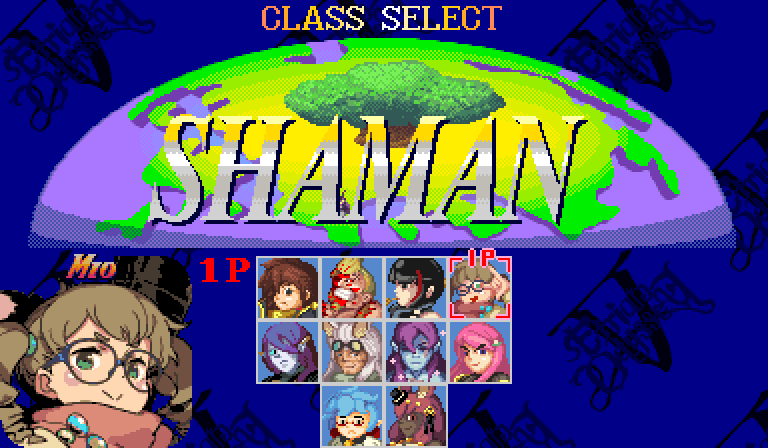 Shamans are the buff class of EO5, ala Troubadours in EO1/2/U/2U, Prince/Princess/Sovereign in EO3/2U, and Dancer in EO4. They're kind of like a mixture of Troubadours (a variety of party-target buffs) and Sovereigns (options for healing, Monarch March again, offensive options). I initially wrote them off because "who needs a buff class with all these weird skills when I can just use someone else," but they're actually far more effective than their somewhat disjointed skillset might make them seem. Their first specialization gives them damage options and methods for proactively blocking damage, while their second specialization gives them passive healing and options for mitigating damage and disables. 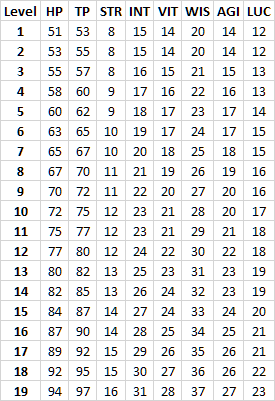 bows, and can wear

Both Shaman specs could reasonably be filled by a Lunarian character. Buffs are stat independent and you wouldn't be losing out on too much healing, while you gain a considerable amount of extra damage on skills like Oracle: Dance.

Increases the speed and reduces the TP cost of Prayer skills. The TP cost reduction is performed by subtracting a static amount from the base cost, and then multiplying that by a percentage.

Want your Shaman to not be bled completely dry of TP after casting a few buffs? You're gonna need some points in Prayer Mastery. There's a reason I had Mio put a whopping five points into Prayer Mastery the first time she was in the party.

When the Shaman buffs an ally, that ally recovers a static amount of HP, plus a percentage of their max HP.

Early and midgame Shaman builds can sometimes have leftover skill points, so tossing them into free healing isn't the worst thing you can do. Don't expect Gospel to be super fantastic or anything, though.

Increases all party members' attack for a set amount of turns. Has no speed modifier at all levels.

The most basic and arguably most important skill for any buff class in any EO game. The scaling on Eradication is pretty terrible, though--you get 21% at level 1, and 35% at level 10. What that means is you spend 9 skill points to get an extra 14% damage (duration increases are a big part, yeah, but let's ignore them).

Increases all party members' defense for a set amount of turns. Has no speed modifier at all levels.

Defense buff blehhhhhh. At least these are more useful than they were in EO2U, where damage was either pitiful or had to be fully negated, lest you suffer a party wipe.

Increases all party members' non-base accuracy for a set amount of turns. Has no speed modifier at all levels.

Useful if you're stacking a bunch of skills that have base accuracy penalties, useless if not.

Dispels one buff and/or one debuff on one ally. Restores that ally's HP and increases their action speed for one turn. The healing is doubled if both a buff and debuff are removed. Has a 2000% speed modifier at all levels.

Useful for emergency healing, or if there's one particular skill that you really need to go off first in the turn order. 9999% speed modifier isn't priority but it might as well be.

Increases all party members' resistance to fire/ice/volt, and adds that element to their normal attacks, for a set amount of turns. Has no speed modifier at all levels.

None of these are terribly useful on their own (unless you're going up against a boss whose attacks you know in advance), but they're meant to be combined with the Oracle skills, one of which is right below this!

Cancels Prayer: Blaze, Prayer: Cold Rain, or Prayer: Purple Lightning (whichever is oldest) on the user. Deals ranged INT-based damage of the element of the skill canceled to all enemies. Reduces hit targets' resistance to that element for one turn. Has a 200% speed modifier and 150 base accuracy at all levels.

Either a weaker version of the elemental Circles from EO2U, or a severely nerfed version of the Fantasias from EOU/EO2U, depending on how you look at it. Dance is still really useful, especially if you're working with a Chain-focused party or a Warlock.

Memories of a Previous Life
Requirements: None

When a buff is removed from the user, they have a chance to reapply it.

Useful mostly for removing the one turn delay you'd otherwise need to recast a skill that removes a buff, such as Oracle: Dance. I wouldn't put points into it early, but it's pretty good in the lategame.


Prayer for the Soul
Requirements: Blessing of Heaven level 3

If the user has at least one buff on them when they take fatal damage, they have a chance to instead dispel their oldest buff and endure at 1 HP.

Cancels one buff and debuff on the user. Restores TP to other party members in the user's row, based on a percentage of their maximum TP. The restore amount is doubled if both a buff and debuff are canceled. Has an 80% speed modifier and costs 40 TP at all levels.

Honestly? I can think of worse skills. It's something for a Shaman to do if anything attack or buff-related isn't needed at the moment.

Cancels all buffs and debuffs on all party members and all enemies. Restores the user's TP. The TP restoration is determined by multiplying the base restore by how many of the following types were removed: party member buff, party member debuff, enemy buff, enemy debuff. Has a 200% speed modifier and costs 40 TP at all levels.

Nnnnnnno thank you. Any reasonable race for Shaman will have good TP, and I can't think of any situation where you'd want to immediately purge all modifiers on everyone. There's basically one postgame boss this is useful for, and that's kind of it.

Cancels all instances of the elemental Prayers on all party members--although only the caster is required to have one of the buffs. Deals 5 instances of ranged INT-based damage of the element of the oldest Prayer canceled on the user to random enemies. Can hit the same target multiple times. Doesn't seem to have a speed modifier defined, but also doesn't have the priority flag. Has 150 base accuracy at all levels.

1000% INT damage. Even if you're not using a Lunarian reclassed into a Shaman, and even taking into account that you need one of the elemental resistance buffs to use it, that hurts.

Cancels all instances of elemental Prayers on all party members. For one turn, all party members that had Prayers canceled will absorb any damage of the element of whatever Prayers were canceled. Doesn't seem to have a speed modifier defined, but also doesn't have the priority flag.

Oh hey, it's levels 10-20 of the elemental Walls. Want to completely negate an elemental attack you know is coming (which, admittedly, is fairly rare in EO5)? Just break this out.

Requires three buffs on the user to use. Cancels all buffs on the user. The user will then attack one enemy with their equipped weapon (with a damage increase). Reduces the target's damage for one turn. Any modifiers to the user's normal attacks are applied for Channel the Gods. For example, if the user has a bow equipped, as well as Prayer: Blaze, Channel the Gods will be ranged, and deal stab+fire damage. Doesn't seem to have a speed modifier defined, but also doesn't have the priority flag.

Honestly, despite its insane damage modifier, Channel the Gods is more useful for the damage reduction than the damage. It's also an absolute pain in the ass to set up, and is best used for... I dunno, when a skill you can't block with Oracle: Halo is coming.

Consoling the Dead
Requirements: None

When the user is alive, any allies with buffs have their HP restored when they act.

Pretty insignificant healing on its own. Stack it with stuff like Affection and Animal Therapy, along with a defense buff, though, and it's entirely possible you can forgo a dedicated healer.

Increases all party members' resistance to ailments and binds for a set amount of turns. Has no speed modifier at all levels.

Cutting infliction chances by more than half is pretty damn good, especially when you get into the later parts of the game and really nasty ailments start coming out.

Increases all party members' non-base evasion for a set amount of turns. Has no speed modifier at all levels.

Increases all party members' maximum HP for a set amount of turns. Has no speed modifier at all levels.

A 40% max HP buff's pretty significant; combined with a level 10 Prayer: Guardian, you can get a party that has 1.75x more effective HP than normal.

For one turn, when an ailment/bind is inflicted on a party member, they have a chance to cancel a buff instead.

An almost-guaranteed way to block ailments and binds? Sure. I mean, it's effectively limited by how many buffs a character has, but if you're blocking an all-party ailment skill or a row-target attack that inflicts something, it'll suffice.

Restores HP to all party members for every 3 steps they take in the Labyrinth.

For one turn, all party members with buffs will recover a percentage of all damage they deal.

Something to spam if your Shaman has nothing else to do. Why not let your damage dealers do their own healing for a turn?

While the user is alive, party members with buffs will have their HP restored when they take damage, once per turn. The restore is based on a static amount and a percentage of the target's maximum HP.

More passive healing to invest in when you don't have anything else. See Consoling the Dead for my opinions on stacking passive healing.
Table of Contents